One Fire, Two Flats, and a long ride at night. 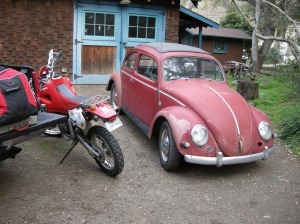 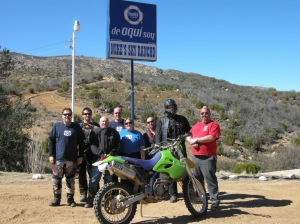 Thursday:  Chuck (Ford Diesel Pickup), Tegan (KLX, KLR650), Clay (Honda xr650), Ryan (Honda XR250) and Kalle (KLR 650) left the club house in Chuck’s and Clay’s trucks after the Thursday night meeting.  The plan was to drive to Tegan’s Uncle.s house but that fell flat at 2am and all stopped at a Motel 6 just north of Button Willow. 6am wake up call Dennys and on the road at 8am. A quick visit with Tegan’s 93 year old grandma in Long Beach and then to Tegan.s Uncle’s house. Highlight on the Friday overnight stay was the .57 VW beetle with 600,000 miles. Saturday morning on the road at 8am. Cool, now leave the trucks behind with the exception of Chuck.s Ford
with gear and an extra bike.  Here we pick up Sean (1999 KTM LC4). Next stop the border at Tijuana. Right?  Nope. Bead on Clay.s back tire breaks (the uber strong metal cable) and tire turns into jello. Sean spots it and the group exits at the next off ramp. What we thought was a bad seat turns into a tube change. Back on the road to get a spare tire and tubes. Right?  Nope. Tube blows a few miles down the freeway. New plan, put Clay.s bike on the back tailgate of the truck, put Clay in the truck and drive off to get the tire and tubes. What was to be a 10am meeting in Tijuana with Casey (BMW 850), Brian (2008 KLR 650) and Stephan (DR 450), now looks like a 2pm meeting in Ensenada. First break was that the shop we stopped at (House of Motorcycles) had a Dunlap 18 606 in stock and at only $69 was a deal. Tubes at $25 weren’t such a deal.  No time to fix Clay.s tire so he.s stuck in the truck with Chuck and Ryan for the day. Cross the border and bad traffic in Tijuana. Highway 1 south to Ensenada after some confusion. Fish Tacos at 2pm and a meet up with Stephan, Casey, and Brian. Casey doesn’t look so good. Too much fun the night before and he.s paying the price. The plan is to stay at Mike.s Sky Ranch that night. Chuck comments that we have four hours of light and a one hour drive. Kalle knows he.s wrong but doesn’t comment.  After an hour drive on MEX 3 west and now several military check points Chuck gets pulled over by a federal police. No Ticket = No
Problem. The bikes are riding ahead on a nice country highway. Hills are green and large boulders define the landscape. Then someone notices flame coming from Casey’s exhaust.  He.s moving fast with burning debris trailing, socks, underwear, and hoody.  His bag has caught on fire from the BMW’s exhaust pipe.  As the bag burned Casey.s clothes flew. Not a problem as he was doing 60mph but more exciting when he stopped. The fire was stompped out and Casey gathered up what was left of his crispy clothing. This all takes time. And the turn off to Mike’s Sky Ranch off of Mex 3 was taken after dark. It.s a 21 mile drive on an ok to poor dirt road. Never ride after dark in Mexico they always say. Lacking better judgment the group
of nine heads south. A few notables on the road. Jack Rabbits like to
follow the light of your bike while you ride. Burros take on the spooky
glow of night wonders in the dark, but then become clear as you approach at a high rate of speed.  Kalle had been to Mike.s Sky Ranch before so he led. Three stops were made at intersections to gather the group. The road is ok to poor as were the skill levels of the riders after a day of riding and much silt on the road. Some riders dismounted and those who were, were tired from picking up their bikes. Kalle wasn.t too bothered by riding in the pitch dark on the climb to Mike.s since he had some memory of the ride from last year. But others had the opportunity to ride an unfamiliar 20 miles of dirt road in the Mexico backcountry in the dark. A real challenge to the mind, and for some, to the body.  At the last fork all gathered to talk of dismounts, swimming, paddling, and star gazing. Kalle looked at the AAA map and estimated the Ranch was just a mile more. Nope, Three miles of slow going but a great ride. Would have been nice to have had Phil.s Uber Dakar 100w light but the KLR bulb was fine. Kalle commented that Mike’s will be just after the water crossing on the left. “Water Crossing?” a few commented. Kalle assured all that it would be smooth.   It was, but with three miles of poor road, thoughts
ran wild. 8pm all arrived at Mike.s Sky Ranch ($60 each which included dinner and breakfast). The courtyard (where you park your bike) had 40-50 bikes. The place was full but with reservations Mike was expecting us. Everyone talked on and on of the thrill of overcoming the drive. And the element of darkness somehow made the challenge extra special. Clay was thanked for the tire troubles which give the group the opportunity to overcome such a challenge.

Sunday morning. A leisurely 11pm departure down the road from whence we came and everyone commented that it was a great road to ride in the daylight. Then East to San Felipe for more military checks (we’ve seen more this year than in the past years). We stayed at El Capitan in San Felipe based on John and Cary’s blog recommendation. They were right, it’s clean and friendly ($50 night per room) plus a pool. Later Fish Tacos and drinking for most.

This entry was posted on Monday, March 2nd, 2009 at 5:22 am and is filed under Uncategorized. You can follow any responses to this entry through the RSS 2.0 feed. You can leave a response, or trackback from your own site.

One Response to One Fire, Two Flats, and a long ride at night.